At least 14 people are dead and 150 missing after a piece of a Himalayan glacier fell into a river and triggered a huge flood in northern India.

The floodwaters burst open a dam and a deluge of water poured through a valley in the state of Uttarakhand.

Most of the missing are believed to be workers from two hydro power plants in the area.

Hundreds of troops, paramilitaries and military helicopters have been sent to the region to help with rescue efforts.

Get breaking news on your Mobile as-it-happens. SMS ‘NEWS’ to 20153

Experts are investigating the incident though it is not yet clear what might have caused the glacial burst. Officials say 25 people have been rescued so far.

In a tweet on Sunday, Indian Prime Minister Narendra Modi said he was keeping a close watch on the situation in Uttarakhand.

“Have been continuously speaking to authorities and getting updates on… deployment, rescue work and relief operations,” he said in a tweet.

“India stands with Uttarakhand and the nation prays for everyone’s safety there.”

Leaders from across the world have also sent their condolences to families of the victims.

“My thoughts are with the people of India and rescue workers in Uttarakhand as they respond to devastating flooding from the glacier collapse,” said UK Prime Minister Boris Johnson in a tweet.

“The UK stands in solidarity with India and is ready to offer any support needed.”

Destruction in its wake

Uttarakhand police said an avalanche struck at about 11:00 local time (05:30 GMT) on Sunday, destroying a dam known as the Rishiganga Hydroelectric Project.

Police said the impact catapulted water along the Dhauli Ganga river, damaging another power project downstream in the Tapovan area. Senior police officials told media that a bridge in the Tapovan area that connected 13 villages was washed away in the avalanche.

One witness compared the flash flood to “a scene from a Bollywood film”.

Video showed the floodwater barrelling through the area, leaving destruction in its wake.

Emergency crew have managed to rescue 16 workers who had been trapped inside a tunnel that had been filled with debris.

Officials told the BBC that around around 35 to 40 others are thought to be trapped in a second tunnel. Emergency crews have reached the mouth of the 2.5km (1.5 mile) tunnel and are in the process of clearing the area with heavy equipment.

Uttarakhand, in the western Himalayas, is prone to flash floods and landslides.

Some 6,000 people are believed to have been killed in floods in June 2013 which were triggered by the heaviest monsoon rains in decades. 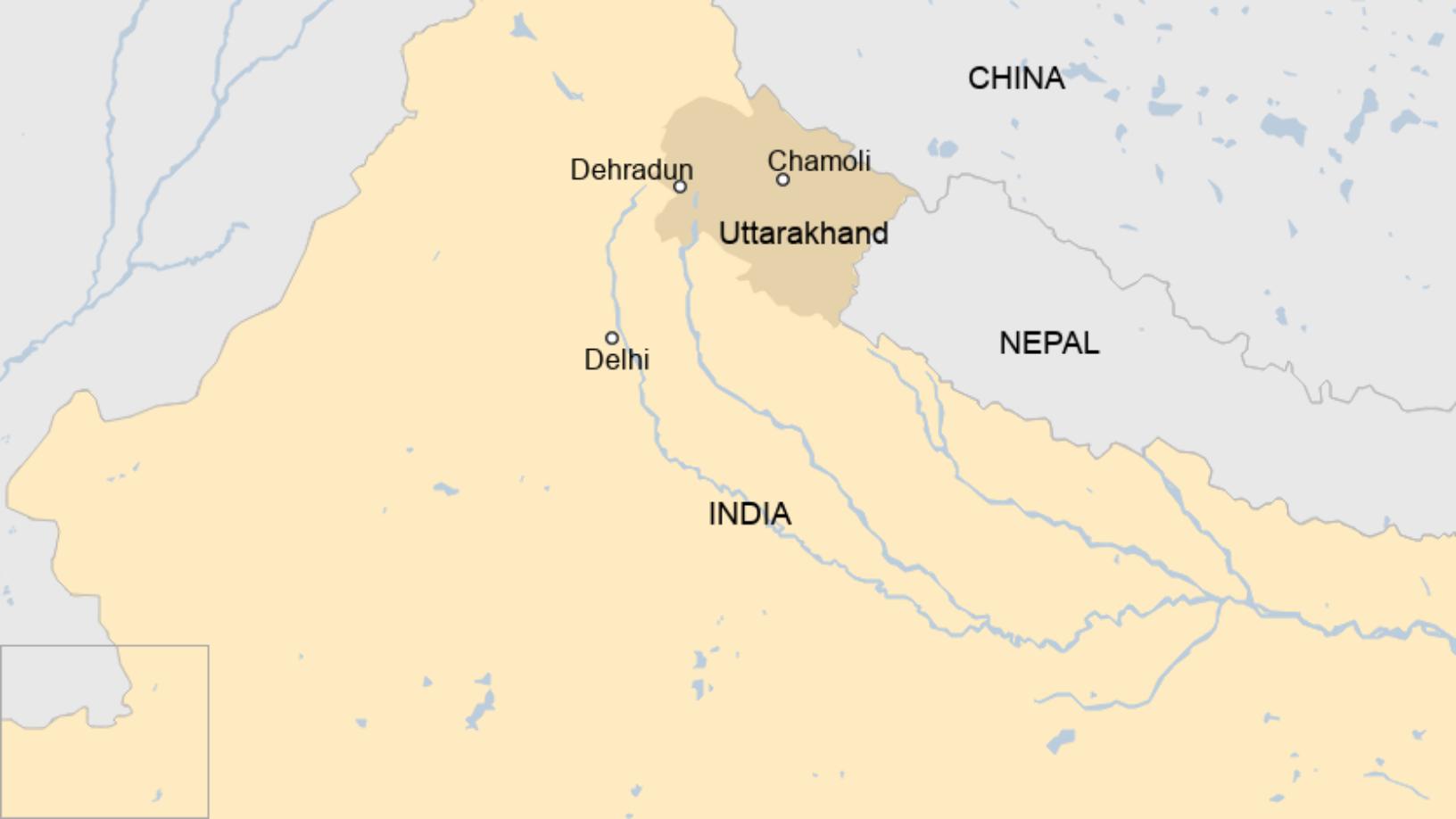 What caused the glacial burst?

The remoteness of where this happened means no-one has a definitive answer, so far.

Experts say one possibility is that massive ice blocks broke off the glacier due to a temperature rise, releasing a huge amount of water.

That could have caused avalanches bringing down rocks and mud.

“This is a strong possibility because there was a huge amount of sediment flowing down,” said DP Dobhal, a senior glaciologist formerly with the government’s Wadia Institute of Himalayan Geology.

Experts say an avalanche could also have hit a glacial lake that then burst.

Another possibility is that an avalanche or landslide may have dammed the river for some time, causing it to burst out after the water level rose.

Sunday’s disaster has prompted calls by environment groups for a review of power projects in the ecologically sensitive mountains.

Uma Bharti, a former water resources minister, said that she had previously spoken out against having any power projects on the Ganges and its tributaries when in government.

State to phase out charcoal from major towns in 2028